Start a new series for 99 cents!

The Water Princess by Gina Manis 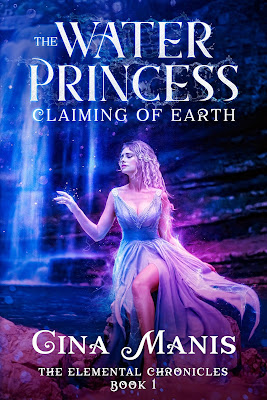 Amazon
Celine is the forgotten princess of Clearwater Kingdom. Cursed by her sister, her powers are locked inside her, and she is hidden far away on the edges of the Earth Realm. The holy lands and nuns with whom she takes refuge, ensure her safety from those who would see her cursed form, including ogres who want her blood.
In a world where there are two kingdoms, Fire and Water, a battle rages, and Fire is winning. The realms are suffering because of the imbalance of power, and it doesn’t help that a Fire Queen sits on the throne in the Water Realm.
All Celine wants is to find her freedom and a way to help her people. She has been a prisoner until one day, she finds her answer. She offers herself up to the Elementals Gods, to help Earth, Wind, and Water defeat Fire. She will unite the three elements and help make them stronger with each a child she bears. In return, they grant her freedom from the curse. She will unite with the three strong, determined elements who come to see her seated on her rightful throne and help make them stronger with a child she bears for each.
Lindon, the Wind Element, is the charmer, with seduction in his breeze. It teases not only her but him. But Tate, the Earth Element, is the one who catches her eyes. She knows him, and had at one time, promised to marry him. For Tate and Celine, it is so easy for them to pick up right where they had left off. Falling in love and experiencing passion for the first time.
The journey begins as soon as she steps foot outside the convent gates. A roar goes off, and every ogre knows she is for the taking. The one she fears the most is Brown, the largest, most persistent, and smartest of them all. He has always been there close by. Watching and waiting.
The danger is all around, and the beasts are coming for her. On the run, she finds herself connecting and drawing closer with her men. It’s not just the ogres that become the threat. Fire Elements are on the rise, and other dangers are lurking in the forest.
Will the Elements get Celine across the Earth Realm alive? And if so, will they all be together when they do?
Posted by Gina Manis

The problem is that you provide may be worth our time and also effort.
Live Sex Chat