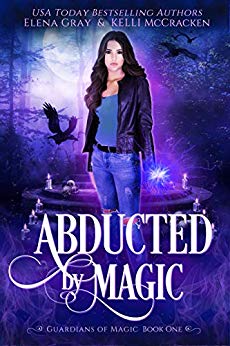 A dead witch, an angry coven, and a dangerous killer...Some girls have all the bad luck.
When a wounded witch transfers her magic to Katarina, she’s left with a power she’s unable to wield as a human. Along with that magic comes four sexy guardians. They’re willing to sacrifice everything not only for the power she holds but also for Kat, a human strictly forbidden to them.
With their destinies intertwined, fighting fate is going to be a lot harder, especially with a killer on the loose, a killer who’s searching for Kat.
Thanks to a traumatic childhood experience, Kat has avoided her grandmother’s tarot readings and premonitions for years. But now she will need to set aside her fears and embrace that lifestyle again. Otherwise, she may not survive what’s ahead.

Abducted by Magic is a slow burn reverse harem paranormal romance. There are no love triangles in this book. She gets to choose them all.Abducted by Magic was originally published in the Fated Mates Boxed Set.

⭐️⭐️⭐️⭐️⭐️❤️This book has five stars across the board and well deserved, every one. It captures you from page one, the world, the creatures, built into such detail you will fall in love with them. The world is amazing, with back alleys, caves, the night looking over the city. Even the graveyard was a bad ass scene. The plot and story are strong with a mixture of mystery, paranormal lifestyle, with great characters. A slow burn with desire but not the act itself, being left out, holding us in suspense. Seems uncommon with this genre of book but fits perfect. I love the ending and can't wait to see what comes next.