A the end of the Summer 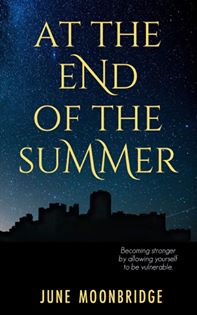 Amazon
Joshua’s life as a rock guitarist seems like a dream come true. Sold out concerts, red carpet events and wild nights portray him as a confident young man with the world at his feet. Only few friends know the scars he carries.
When freelance photographer Caroline meets the rock band Burning Ruins at the after party, an irresistible chemistry of attraction between her and the sexy rock guitarist is clearly seen to everybody. However, after a forced conversation from Joshua’s side, Caroline's convinced the attraction is not mutual.
Waking up the next morning, Caroline has no idea what happened. She flees out of the hotel room mortified, convinced she’d become another of the band’s trophies. Determined never to meet anyone from Burning Ruins ever again, she has no clue people around her have different ideas.
In a summer that takes them from London to Wales and to the sultry heat of Rome, they’re desperately fighting their demons from the past, while trying to protect their broken hearts. Will they ever let each other mend their broken hearts or will they try to heal them alone?